Marijuana Possession at Workplace is a Fireable Offense

Employers face a confusing patchwork of Federal, State, and Local laws regarding the drug and the consequences of a positive test are not clear always. Marijuana is still considered illegal at the federal level. The Controlled Substances Act (CSA) lists the drug as a Schedule I controlled substance. While the Americans with Disabilities Act requires employers to make reasonable accommodations for qualified workers with disabilities, possessing and using marijuana for any purpose is still a federal crime, regardless of state law, this means under the ADA, employers do not need to accommodate marijuana use, even when an employee is approved for medical reasons. When it comes to drug testing, employers are stuck between a rock and a hard place. On the one hand, they want to ensure that their employees are not using drugs. On the other hand, they don’t want to violate their employees’ rights.

With these clashing federal and state laws, what an employer will do when a drug screening turns up proof that an employee or a candidate has utilized marijuana? Could the individual still be terminated?

As the principles develop and jurisdictions pass stronger securities for marijuana usage, it varies. But, whatever the choice, rising laws and court decisions clarify that associations must survey how they approach their employees’ permissible marijuana use and make changes to their policies and procedures to remain in consistence.

Drug Testing Laws May Vary from State to State

No law obligates employers to acknowledge marijuana use and a hindrance at work. Indeed, even in states where marijuana is legal, companies and associations may keep up zero-tolerance drug testing approaches. That is because of few state and local laws, alongside ongoing court decisions, obligatory accommodation for marijuana use.

In the state Maine and Nevada, where both restorative and recreational pot is legitimate, legislators have made it a stride further; their guidelines state managers cannot settle on unfavorable choices about most workers employment dependent on their marijuana use outside of the work environment. Furthermore, in New York City, new laws handle the issue of job candidate’s marijuana use and prohibit most pre-employment tests for marijuana.

Few states are not clear in addressing accommodations for current employees and job seekers. In 13 states, marijuana use is legal, but employers have no obligation to permit its utilization. Seven different states that have legalized marijuana are quiet on the issue of employer convenience.

This law is taking us to a place where a few choices address the requirement for convenience. Before 2014, court decisions more often fell on the side of the employer, however, the lawful scene is developing. Since that time, courts have been bound to decide for marijuana using employees in states that explicitly require employer convenience.

Eminent case law incorporates the Delaware Superior Court’s 2018 decision in Chance V. Kraft Heinz Foods Company. For this situation, after a place of work-mishap that took place, Kraft Heinz terminated a worker for bombing a medication test even though he was a medical marijuana cardholder. The court held that the anti-discrimination provision of Delaware’s medical marijuana law is not appropriated by the federal Controlled Substance Act, enabling the specialist to continue with the vast majority of his cases.

This decision could educate court choices in different states going ahead. It additionally should fill in as a notice for employers that the contention that they can victimize marijuana users just in the light of the fact that the medication is illicit at the federal level might be a losing recommendation.

For another case, Whitmire v. Wal-Mart Stores Inc., an employee who was a medical marijuana user in Arizona took a drug test activated by hands-on damage and tried positive for pot. Although the screening occurred two days after the damage, Wal-Mart terminated the employee, guaranteeing that the test outcome showed she was high when she was harmed during her day of work. She sued Wal-Mart, contending that her end damaged the Arizona Medical Marijuana Act, and won the case.

Like Delaware’s law, Arizona rules prohibit discrimination against marijuana users. Additionally, because a test is certain for pot that does not imply that the individual was weekend at the hour of the test. Individuals can normally test positive for the medication for as long as seven days after use.

These decisions should provoke employers to reconsider their zero-resistance approaches in states where pot convenience is required and, rather, center around forestalling pot use or hindrance while working.

What Does the Law State?

Research shows that even after a person who has smoked marijuana is no longer impaired, long-lasting effects continue from several hours to days after use. Marijuana users can have trouble determining distances, completing multiple tasks at the same time and making quick decisions. So not all occupations especially safety-sensitive ones can accommodate marijuana use, in any event, for restorative reasons.

When a job candidate or employee is an approved medical marijuana user, they must inform the employer from their end. Employers may require that these individuals seek a written statement from their prescribing physician that clearly states that they have reviewed the duties of the position in question and they believe the person can safely perform the tasks.

To address workers who may be impaired at work, companies must have workplace policies that spell out the circumstances that would prompt reasonable suspicious that a worker is high and obligate drug testing. Those rules should also layout the specific consequences if the test result is positive and guide its equitable enforcement.

As a major aspect of this procedure, associations must train managers to spot articulable perceptions that a laborer is high. That could incorporate a person who is acting in disinhibited fashion, not following security conventions or settling on awful decisions.

These are the indications of disability, and those are legitimate triggers to dispatch a sensible doubt test whether there was a mishap or damage or just somebody monitoring an individual doing it.

Concerning marijuana, a lot of associations are yet processing quick moves in rules and guidelines. But as efforts to legalize weed continue to speed up across the country, it is recommended that employers act now to consider their own business needs to revise and modify their policies accordingly.

The widespread use is evidenced by the increasing number of people failing marijuana tests, especially in states where recreational use is legal.

For more information on drug testing please contact 855-955-4777 or visit www.securecheck360.com or mail us on [email protected] 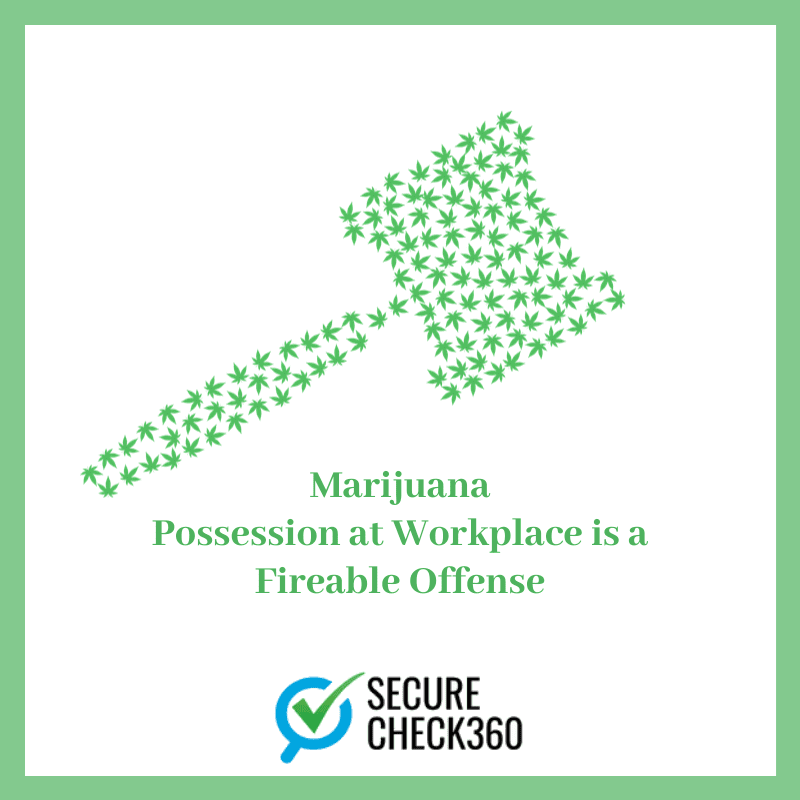 We provide our clients with both cutting edge, top of the line background screening technology, and personalized support and service. This 360 degree support system is the foundation of our client relationships.

This website uses cookies to improve your experience while you navigate through the website. Out of these cookies, the cookies that are categorized as necessary are stored on your browser as they are essential for the working of basic functionalities of the website. We also use third-party cookies that help us analyze and understand how you use this website. These cookies will be stored in your browser only with your consent. You also have the option to opt-out of these cookies. But opting out of some of these cookies may have an effect on your browsing experience.
Necessary Always Enabled
Necessary cookies are absolutely essential for the website to function properly. This category only includes cookies that ensures basic functionalities and security features of the website. These cookies do not store any personal information.
Non-necessary
Any cookies that may not be particularly necessary for the website to function and is used specifically to collect user personal data via analytics, ads, other embedded contents are termed as non-necessary cookies. It is mandatory to procure user consent prior to running these cookies on your website.
SAVE & ACCEPT
Receive latest updates

Enter for a chance to win BONUS CHECKS!